What are the smooth dances, and where did they come from?

The four smooth ballroom dances are Waltz, Viennese Waltz, Tango and Foxtrot.  Here is a video from a competition in 2005 showing them at their professional level.  We will look at all of these dances, as well as the Argentine Tango, in this post today.

If you are interested in getting into the nitty-gritty of what makes the Waltz what it is, check out this blog post!

The Waltz came about in the early 13th century as a folk dance in Germany.  It quickly gained popularity and spread throughout Europe because of how unique it was compared to the other dances at that time.  Flash forward to the Romantic era, and big-name composers like Johannes Brahms and Frédéric Chopin were composing for this dreamy dance.  Back to the 1500s, though, it had reached the courts of Vienna, where it was morphed into the… 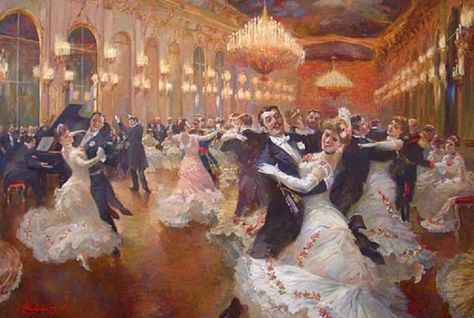 This blog post also goes into the differences between these two versions of Waltz.  Here is another blog post that goes very in-depth about the history of the Viennese Waltz.  Unlike most court dances, which were rigid and involved much more complicated choreography, this dance kept the sway and the beauty of the original folk dance.

But at first, people looked down on the Viennese Waltz.  It was said that women would lift their dresses up (so they wouldn’t be stepped on) and would dance as close to their partner as possible.  There was even a pamphlet published in 1797 titled “Proof that Waltzing is a main source of weakness of the body and mind of our generation”!  Nevertheless, the dance continued to gain popularity, especially when composers like Johann Strauss began to write music to accompany the Viennese Waltz.

Most people are able to spot this dance from a mile away.  The sudden dynamic changes in the music and the drama in the dance make the Tango very unique.  Tango is a mix of African, European and Argentinian gaucho styles as they all immigrated to Argentina in the mid 19th Century.  A gaucho is the South American version of a cowboy. While the older generations looked down on the style for its passionate nature, the younger generations fell in love with it.  The famous scene from Four Horsemen of the Apocalypse where Rudolph Valentino danced the Tango made this dance popular in America.

Eventually, the dance gained enough popularity to be seen by ballroom studios.  They took it and gave it a structure so it could be taught through a syllabus, where it became the Tango we all know and dance in the studio.  The dance from that came from those gauchos stayed pretty much the same and is known as the…

Just like the dance above, this dance has a lot of personality.  As mentioned above, the Argentine Tango is the style that is still danced socially in Argentina today.  Below is a video of a milonga, which is where tango dancers gather to dance and socialize.

The Foxtrot came about in the early 1900s when Harry Fox and his company, “American Beauties,” were instructed to perform in between shows at the New York Theater.  It was an instant hit! The dance was first paired with ragtime music, and its popularity quickly continued to grow! Even when the Lindy Hop emerged in the 1940s, Foxtrot still reigned supreme, as people could dance Foxtrot to all the Lindy Hop records.  Here is a compilation video of Foxtrot dancing in the 1920’s; see if you can recognize any of the steps that we teach today!

Contact us today if you would like to learn any of these beautiful styles!  Stay tuned for more posts on the history and development of the other style of dances as well.