Let’s continue our dive into the history of different partner dances with Hustle and West Coast Swing!

Characterized with the glitz and glam of disco music, the Hustle is a funky and energetic dance that is easy to learn and get out on the dance floor.  The name started out as an umbrella term for a handful of popular disco dances in the 1970s, but now it is used primarily for the partner dance.

The Hustle started out in the South Bronx in the early 1970s, where it is believed that younger Puerto Ricans would use this style at house parties and clubs as an alternative to more suggestive dancing.  In the beginning, it looked nothing like the Hustle you know and dance today.  It started out as a 5-step count dance, and later in 1974 it changed to 6-step counts.

The style got its big break when it was featured in the movie Saturday Night Fever in 1977.  After the movie came out, Arthur Murray studios were flooded with calls about learning the Hustle.  Although the explosion in interest died down with the popularity of the movie, thousands of people continued to come to Arthur Murray studios to learn this new dance throughout the next decade.  Versions of Hustle meshed with more traditional ballroom dances, like the “Tango Hustle,” were also introduced through Saturday Night Fever. 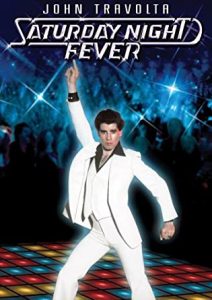 West Coast Swing was one of the many swing dances that came about in the ‘40s.  Dean Collins was supposedly one of the biggest early influencers on developing the style of Swing unique to the US west coast.  Most people credit him as a huge influence in the development of this style, though he would never say so himself.  Laure Haile, an Arthur Murray National Dance Director, first named the style she saw in Los Angeles “Western Swing,” and ever since 1988 it has been the official state dance of California!

Nowadays, a big part of the West Coast Swing culture is Jack and Jill competitions, where you will dance with a randomly assigned partner to a piece of music chosen by one of you and the winners are chosen based on their musicality, connection, communication and sense of humor!  Depending on where you are, you will either stay with the same partner or you will keep switching partners throughout the competition.  Check out the video below to see what a Jack and Jill contest might look like, featuring Arthur Murray instructor, Stan Ivanov.

If any of these styles spark your interest, contact us today to schedule a lesson and learn to dance!  Also, check out our other posts about the smooth dances, rhythm dances, and other fun styles.

How to Dance to Popular Songs on the Radio 2Latest Blogs